McNally said: “I’m emotional after winning that. We hoped he could do that, but whether he could do it over fences or not was another thing as he’s only a pony.“Going around the paddock against those big horses, he was dwarfed. I walked the track early, I went down to the last and then to the open ditch and thought ‘am I wise doing what I’m doing’?“Paul was majestic on him and the horse was unbelievable. We’re so proud of him to jump around there the way he did.”- Advertisement – – Advertisement – Fit from a recent spell on the Flat – including a victory on his latest outing at York last month – The Jam Man was a heavily supported 5-2 favourite for his shrewd connections, and ultimately got the job done with the minimum of fuss.With champion jockey Paul Townend in the saddle, the seven-year-old was settled towards the rear for much of the three-mile contest before making smooth headway before the home turn.The Jam Man cruised to the front in the straight and pulled right away between the final two fences – passing the winning line 18 lengths clear of Roaring Bull, with Scoir Mear and Discordantly third and fourth respectively.- Advertisement – 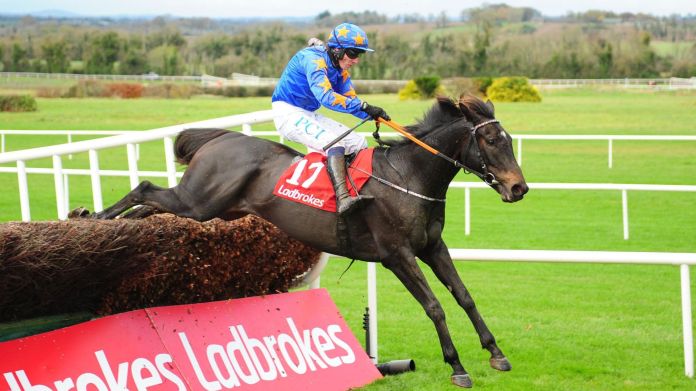 The Jam Man made the most of a lenient mark over fences with a wide-margin victory in the Ladbrokes Troytown Chase at Navan.Ronan McNally’s charge has a rating of 143 over hurdles following seven victories, but returned to the larger obstacles for the first time since winning at Cartmel in June of last year a stone lower in the weights.- Advertisement – McNally is enjoying an excellent campaign, having also trained both The Trigger and Dreal Deal to win five races in a row since July, and the trainer is keen to pay tribute to his young son Kian, or ‘Tubbs’ as he is affectionately known.He added: “It’s a pity for ‘Tubbs’, who is at home. It would have been unbelievable if he was here as he does a lot of work with him at home. It’s a pity he’s not able to share it with us.“We’ve had a great run of it, but we put a lot of work into it and a lot of money into it. I think we deserve the success we get, the horses are treated brilliantly and they are are rewarding us for the care we give them.”On future plans for The Jam Man, McNally said: “I could see him going back to England now. There is a Grade Three (hurdle race) at Haydock and a Grade One at Ascot.“We’ve unfinished business from last year as that wasn’t his run in the Stayers’ Hurdle at Cheltenham (finished ninth). He had aspergillus when he ran in that and I’d love to go back and have another crack.“I’m not saying he’s good enough for a Grade One, but I’d love to go back and give him a chance when he’s healthy and see how he goes.“I don’t think he’s scopey enough to be a Grade One horse over fences. Paul said there if he hadn’t been well handicapped over fences and he had to go looking for big jumps towards the end, you could have been in trouble.”Townend had earlier produced N’Golo with a well-time late run to claim the Grade Three For Auction Novice Hurdle for Willie Mullins.Despite having won two of his three previous starts over obstacles for the champion trainer, the grey was a 9-1 shot for his latest assignment, but finished with a flourish to score by a length and a half from Annexation.Hot favourite Eskylane was only fifth.“It worked out for us. The tongue-tie probably helped on that ground,” said Townend.“I think he’s stepped up today, to carry the penalty, and it was a nice performance out of him.“He could go further, definitely, and even today we thought in that grade, two miles might be sharp enough for him.”There was a thrilling climax to the opening Ladbrokes Giving Extra Places Every Day Maiden Hurdle, with Noel Meade’s 6-4 shot Joshua Webb edging out even-money favourite Grangeclare Native by a head under Sean Flanagan.The stewards called an inquiry after the pair came close together in the closing stages, but the placings remained unaltered.Meade said: “I’d say he’s a nice horse. He’ll go on for a novice now and we’ll see what way the handicapper rates him.”